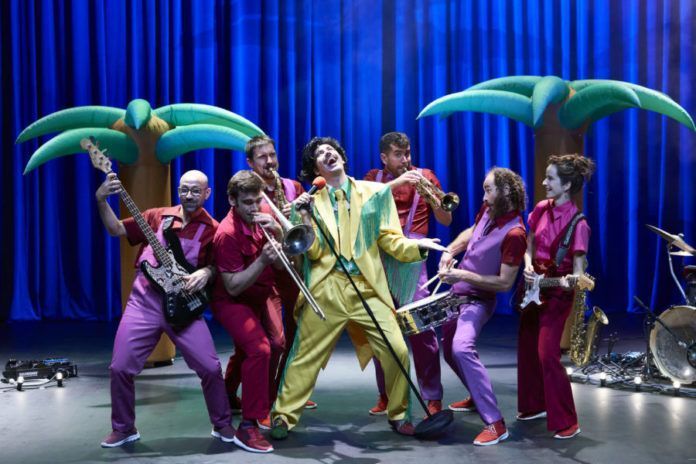 Guillem Albà, in his purest form, will open FIET 2021

When we saw among other “scenic pardalades” a little mermaid with a Disney parody beard lying on a table, “silly” magic games where you could see all the tricks but we didn’t care, or the throwing of pizzas into the audience, all wrapped up with the amazing live performance of the six musicians of “The all in orchestra”, our brains almost exploded. It was the performance of Marabunta that we were able to enjoy in 2015 in the sports centre of Vilafranca de Bonany, which rushed to collapse with the laughter and applause of a very dedicated audience. At the exit, euphoria reigned and the audience, heterogeneous, with a mixture of children, young and old with the professionals of the performing arts and programmers, roared together in a transversal and unanimous criticism: an unrepeatable experience.

Thanks to this Albà/FIET “infatuation”, we have been able to savour Guillem Albà’s new creations, such as Pluja (with Clara Peya) or Calma! very different but full of poetry, humour, emotions and scenic art.

“I like acting. I am happy. While I’m performing, it’s the only time when nothing hurts. Neither backache nor headache. This only happens in acting (or in the water too!). I haven’t acted in the water yet but, I don’t know what would happen.”

From an early age he wanted to create his own shows. Thinking about what I wanted to tell and how. That’s what I learned from my family, which is dedicated to puppet theatre. From an early age I watched them rehearse for hours and hours, how they performed and how we drove up and down in the van. Discovering places, meeting people. They didn’t wait for anyone to call them to make a production. They did it their own way. And this is what I have done, creating my own shows… and from time to time, combining them with other things that are proposed to me. From where you also learn a lot of things, and it makes you grow.

“Living from this makes me happy, and the only thing I try to do in directing or acting… is to make people leave happy, convinced that they haven’t wasted their time. And thanking you for coming to see us. And so on. Creating and acting. Living a lot of adventures travelling, and meeting a lot of people :)”

And, always, behind the scenes, we will find Blai Rodríguez, producer and Guillem Albà’s right-hand man, making things easy for the company’s creations to shine.

For this reason and much more, Guillem Albà & La Marabunta, come to the XIX Children’s and Young People’s Theatre Fair of the Balearic Islands with JALEIU, the opening play of FIET 2021.

JALEIU is a lively show, full of humour and live music, a party where young and old are invited to come, full of rhythm and fun! Those who know the company will know what we are talking about. We will see Albà accompanied by 6 musicians with a provocative, optimistic and funny work, a show to make us burst with laughter and, as they themselves say: to make life a game.

You can enjoy the opening show on Thursday 15 October, at 21:00 h in the Polideportivo 1 space, and as we can’t define it better than they themselves can:

“If we don’t like things, we change them and set up a good Jaleiu”.

With Jaleiu’s programme, FIET, once again bets on tender bourrique, on stage. We will once again be able to savour the creative and communicative energy of Guillem Albà & La Marabunta in its purest form, with the aim of touching the audience’s skin.

We are in favour of Guillem Albà’s artistic embrace full of humour and music!

Gestated in pandemic, the show’s mission is to make the audience burst out laughing with the irreverent and crazy spirit of the company. An absurd politician, a tyrannical policeman, lots of music and flying popcorn remind on stage that the coronavirus is not finished with live theatre.

Review by Núria Juanico Llumà in the newspaper Diari Ara

“Guillem Albà has a good time on stage. Y infects it. To the musicians. And also to the public. From minute 1. It is hard to understand how easily everyone gets into the game. But that magic of communion happens and you stop caring about what happens, what quirky character is introduced in the scene and where each gag leads to. It is chlorophyll freshness. It’s cola staining the sweaty T-shirt and squeezing seams of the policeman. It is a sonorous electric guitar chord topped with a ukulele pluck. It’s what he wants it to be.”

Review by Jordi Bordes at Recomana